This is all about working with nature and within the suns yearly energy budget, It is a closed loop system where coppice tailings (branchy material) are turned into woodchip and fed into no dig raised beds along with grass cuttings which grow organic fruit and vegetables for local demand. The method takes advantage of the association between fungi and plants. The conversion of local woodlands into coppice and standard management is the most labour intensive and time consuming part of this system. It needs forward planning to establish a field scale of any size but once established it requires no artificial fertilisers or animal manures. It is part of natures’ natural cycles!

What is a Coppice Management System? 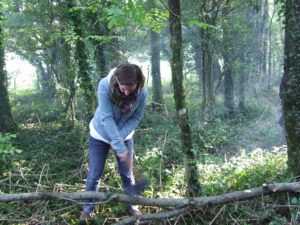 The main feature of a coppice wood is that it is cut periodically and the trees are allowed to grow from the cut stumps which are called stools. The word ‘coppice’ is derived from the French ‘couper’, meaning to cut. A coppice provides a self-renewing source of wood allowing an indefinite number of crops of stems to be taken. Some of the oldest trees in British woods are coppice stools which maybe more than a 1000 years old. Because coppiced trees can live to a great age. Traditionally a wood contains coppiced trees (underwood) and scattered timber trees (standards). In an actively coppiced wood an area of Underwood is cut each winter. The area of felled coppice is most often called a cant or compartment.

This means of material production was at its peak in the 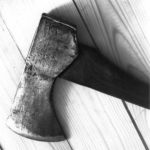 middle ages and would be wholly recognisable to the Roman woodsman as would the hand tools used. Some of the rods are used directly for the various traditional craft industries once established in most regions of the UK.

We need to re-establish very substantial areas of coppice and standard woodland. Predominantly Hazel underwood with 6/7 standard trees for timber per acre  (this varies with ground conditions). Hazel can be cut every six to seven years in an area for up to 120 years before it needs resting. The young regenerative growth is most efficient at carbon sequestration from the air (Carbon draw down). Coppice areas are divided into 6/7 cants (compartments or sections) so that a sixth or seventh is cut every year. On good ground you can get about 4 or 5 thousand sticks per acre when established.

It is worth noting that to cut emissions every opportunity should be taken to use renewable materials worked by hand to replace higher embodied energy materials with consequent emissions in the same way as woven baskets can be used instead of oil derived plastic or metal containers.

All coppice material not directly used as small roundwood is collected and can be sent mainly to growing areas and some to food processing operations for chipping or chipped and dried locally by renewable/solar means. It is of course best to have several small and medium sized sites. Meadows are similarly required close enough to growing areas to be reaped and transported to serve as top mulch. 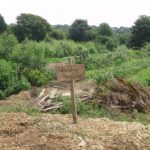 Vegetables are then grown in long no dig beds (alley cropping system) formed by an initial 50cm thick layer of chipped wood. It takes two to three years to establish the growing medium infused with mycorrhizal fungal association. It has been discovered that particular plants and fungi work together symbiotically. In brief fungal hyphe enter plant roots and the fungal mat

collects and delivers essential nutrients to the plant. The plant produces sugars from photosynthesis and gives a share of these to the fungi; which it uses to build its structures. Fossil evidence of this association has been found going back 2 billion years. Most plants have associated fungi including trees. The long no dig beds or alleys are about 3m wide and grouped into four annual rotation cropping beds. A perennial bed runs along every 2 beds to maintain an undisturbed all year round root system to service the extensive fungal mat living in the soil. These perennial beds can include a range of edible forest garden species. A wood chip path wide enough for people and trolleys is left between each bed. 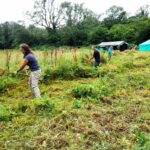 Annually the crops are fed with grass cuttings and more woodchip. Like any garden hand weeding is required in the growing season and requires care and attention to create minimum soil disturbance. For this reason minimal foot traffic is allowed on the beds.

find out more about Fungi 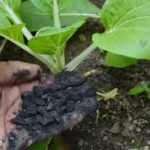 In addition produce from the gardens can be processed and cooked using heat from the combustion of dried woodchips in gasifier burners that only burn the hydrocarbon component of the wood. Combustion is then stopped and the remaining charcoal quenched. This charcoal is then combined with grass cuttings and added to the growing beds. This acts as a soil conditioner which improves the capability of the beds, for some reason fungi really like bits of charcoal in their soil. Between five and twenty tons per acre can be added to effect. 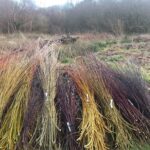 Taking advantage of the fungal association means that edible crops can be grown without additional fertiliser, herbicide or pesticide. In addition material from the coppice can be used to supply the heat to cook food in ways that produce substantial amounts of charcoal (carbon) that can be put into the ground where it will remain for at least a thousand years. This may sound too good to be true but it works, an additional benefit is that  decomposing woodchip beds have a high mulch and moisture retention factor which is going to be an issue as it warms.

Finally the Gower soils are ideal. This is not theory; this method has been developed and demonstrated successfully at market garden scale by Mr Edward Revill of Murton since 2009 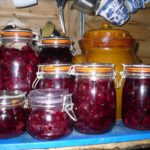 The cost of food will rise as shortage occurs; therefore local horticulture will become progressively viable economically. So we need to create an alternative economy to the fossil fuelled current model. This sort of local carbon negative horticulture is one of the opportunities to do this locally in Swansea. The Climate Conservation Corps is the ideal model for organising young people to work on and be involved in this system.

Because we need System Change not Climate Change!

Climate and Community gave a talk for XRSwansea on Carbon negative horticulture link below: 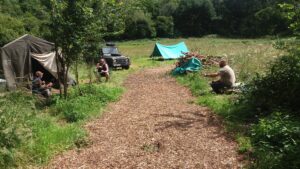