Why we need Healthy Hedges and shelterbelts 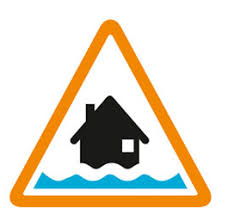 Living along the Teifi river for nearly 20 years teaches you the extremes of rivers in flood and in drought. These last couple of weeks with the onset of storm Callum hit home the increasing frequency of high peak flow and the damage it manifests on our door steps…literally. 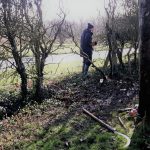 Hedgelaying is often described as ‘the dying art’, by the sentimental or out of date and too costly by the farmer with a large tractor and flailing machine in his shed. Neither are correct, hedgelaying is going to be very much a 21st century activity.

We often forget the service that healthy shelterbelts, hedgerows and woodlands play. Recently as part of some research for a report  I read the Woodland Trust report on the  Pont Bren Project https://www.woodlandtrust.org.uk/publications/2013/02/the-pontbren-project/  ; where an alliance of farmers among other things restored hedgerows, copses and created new shelter belts. This resulted in positive improvements to the output of the farms but also the reduction 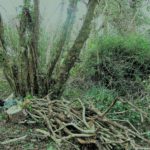 in water runoff which causes peak flow and worse flooding. Independent research by the Centre of Ecology and Hydrology found the infiltration rates (rate at which the water drained into the soil) inside the woodland were 60 times those on the pasture ten metres away. Studies are ongoing but it is not rocket science: well maintained hedges and shelter belts will aid in lowering peak run off and mitigate the ever increasing storms and blocking events which cause large volumes of water to fall over a watershed and cause destructive flood events. 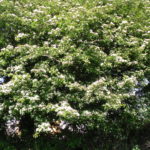 Wildlife also needs healthy hedges to live in, feed from and as wildlife paths to move around along. This time of year is difficult, because the flailing machines come out in October and begin stripping already dying hedges of any new growth they have grown. Berries and other potential food are cut off and deprive the birds and insects of winter sustenance. Is this necessary? The research says overwhelmingly No. Best practice would be laying the hedge or more often to renovate and replant it. Even if a farmer continues to flail, government advice states that every 3 years is adequate and will allow berry laden branches to be available for birds. The Hawthorn (Crataegus monogyna) fruits on 2 year old wood. Many new small emergent trees also get chopped and new standard trees are prevented in surviving long enough to be noticed and flailed around. 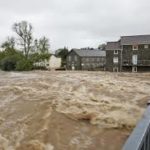 Sustainable land management means creating significant areas of well maintained hedges, shelter belts and woodland. Otherwise the increased flood frequency will cause greater harm and bird numbers and other wildlife will continue to drop and suffer.

Land owners wake up to your responsibilities! 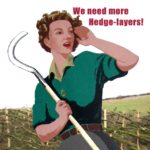